skip to main | skip to sidebar

A Tale of Oregon Elk: On Food and Gratitude

When I was in high school, my family owned a whitewater rafting company. Our offerings of four- to seven-day expedition trips down wilderness rivers attracted mostly outdoor-types from the West, but we also booked the occasional city slicker.

Mary Jo, a hefty and good-natured soul with glossy, black curls and florid cheeks, was one of the latter. She hailed from Boston and was startled to learn that there really wasn't any point in packing her alarm clock in her waterproof gear bag. (Nope, not even with an extension cord.)
Along about Day 3 of Mary Jo's trip, we were floating through open range, where cattle spend the summer feeding on the vast acreage of public lands. Mary Jo, spotting a pair of Herefords drinking along the bank, exclaimed, "Look! Wildlife! What kind of animals are those?"
Sure Mary Jo was kidding, the nearest guide joked, "Oh, those are Oregon elk. They're very rare!" Imagine his surprise when Mary Jo pulled out her camera and started clicking away. He did some fast talking to spare our guest the embarrassment of hauling out her photo album and showing all her friends back home the elusive "Oregon elk," which almost anybody would recognize immediately as garden-variety cattle.
That night in camp, we served up an Italian feast of wine, garlic bread, salad, and spaghetti with marinara and meatballs. Mary Jo ate with her usual gusto. Watching her from across the circle of canvas chairs in the fading light, I wondered if she had even a passing thought connecting her "wildlife" sighting with the meal rapidly disappearing from her plate. I was saddened to conclude, probably not.
Saddened, I say, because although Mary Jo may have been an extreme case, she is far from an anomaly. Too many people these days believe that food comes from the grocery store. I once heard of a woman who, listening in on a discussion about the danger a single plant disease could pose to our inadequately-diverse food supply, said "Oh, I'm sure they'll always have flour at the store." She, like Mary Jo, clearly had no concept of the sacrificial exchange that fuels our bodies.

We the People, with our fast food joints and deep freezes, are so far separated from farm life that we rarely consider that from the T-bones we gnaw once hung the loin of a cow with a swishing tail and liquid eyes. That neat mound of poultry breast was made to nestle warm about a clutch of eggs. Those egg yolks formed to nourish chicks 'til they grew large enough to hatch.
Now, I'm not saying I have a moral problem with eating meat or eggs, any more than I have one with tearing carrots from the soil and scattering my salad with their precious roots. Zucchini grow to ensure there is seed for the next generation, not to be sauteed in my breakfast hash, but saute them I do, anyway. To live is to take other lives. Any farmer knows there's no escaping the fact, no denying it, no point feeling guilty about it.

Those of us who were fortunate enough to be reared in agricultural country are probably at least halfway there. We visited u-pick orchards every fall, plucked wild blackberries from their vines, perhaps retrieved eggs from the nests of disgruntled hens. Some of us even fattened stock for slaughter.
I was eight the first time I observed the death our annual beef cow. The man from the packing plant shot her three times, right there in our barn, before her sway turned to a topple and her topple to utter collapse. He hooked a chain to her hind legs and winched her outside to his truck, where he peeled away her chestnut coat and spilled her foul-smelling offal among the weeds. My mother worried that I, an empathetic child who had bottle fed that animal as a calf, would be put off our daily meals of hamburgers and steak. But I was untroubled. Somehow, with the innate wisdom of the very young, I understood.

Not all children have such opportunities. One of my best friends grew up in the jungles of Chicago. He claims once to have stumbled over a pile of milk bottles and thought he'd found a cow's nest. Does that mean he shouldn't be permitted to eat meat, because he hasn't paid his dues?
Of course not. But I do think it means he should look for opportunities to connect with the lives and deaths that feed him. From farmers markets to bookstores, there is plenty of recourse for those who wish to understand their meals. A number of authors have addressed the concept of late, all from different perspectives. Michael Pollan (The Omnivore's Dilemma), Barbara Kingsolver (Animal, Vegetable, Miracle), and most recently, Lierre Keith (The Vegetarian Myth) come readily to mind.
For the most adventurous -- and wisest? -- more creativity could lead one to a farm on butchering day, to feel the blood from chickens' throats run hot across his fingers, see the feathers float on scalding water and stick like rain soaked leaves to pluckers' wrists. She might pull the trigger that ploughs a painless path through the brain of a hog, or gut a fish from the neighbor's pond, or even simply gather the bosoms of ripe onions as they press up from the soil, or strip peas from their pods, or sever the stems of living herbs to rub beneath a turkey's freshly-denuded skin.

One of the most poignant experiences of my life occurred on a blustery day in early spring at In the Night Farm. A freshly-slaughtered lamb had hung for several days from the north deck, aging beneath its burlap wrap. Meanwhile, out beyond the horse paddocks, lambing had begun. I spent the entire day running between the kitchen, where I rinsed and packaged chunks of carcass for later meals, and the lambing jugs, where I knelt in the hay to draw colostrum from ewes' udders and coax it down the fragile throats of newborn lambs. 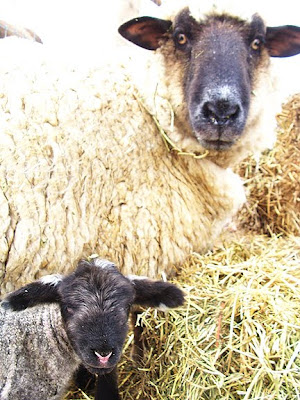 This post is participating in Fight Back Fridays at Food Renegade. Stop by and see what else is on the menu!

A lovely article. I remember seeing a guy from NY at the Eugene farmer market once, asking the vendor what on earth he was holding. It was an onion. "Oh," he said, "onions don't come in green where I live."

I am gong to check out that Keith book. Thanks for mentioning it.

Kim, I'll be interested to know what you think of the book. Dr. Eades posted a lengthy and thoughtful review on his blog: http://www.proteinpower.com/drmike/lipid-hypothesis/the-vegetarian-myth/

Nightlife chronicles my pursuit of healthful, sustainable living among the gardens and livestock of In the Night Farm, Idaho. Pour a cup of tea and join in the discussion of small-time organic farming, primal nutrition and fitness, and the simple pleasures of less urban living.

Your comments and questions are always welcome. Feel free to e-mail me at inthenightfarms@gmail.com.

The Good Life: Best of Nightlife

Read All About It

Other Blogs to Try